An LED screen is a device that can display videos or motion pictures with the pixel being a semiconductor. 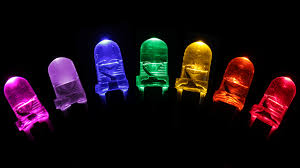 LEDs are semiconductor devices that emit light when an electric current passes through them. Depending on the wavelength, the color of the resulting LED light may be red, green, or blue. If you want the LED screen to emit the complete spectrum of colors, you need to use LEDs of various colors.

The primary benefits of LED screens are:

The aforementioned advantages are the reason that LED screens are used in such widespread applications.

A Pixel is the smallest element of the image. It has a diameter of 1.9-80 mm and each pixel is composed of one to eight LEDs (Fig.2). Each pixel within an LED display contains green, blue, and red LEDs. There are usually 8 LEDs within each pixel, but, sometimes, it may also be more. The integrated processor produces all the primary colors and all shades of white.

Pixel Pitch is the gap between the centers of two adjacent pixels. An LED screen with a higher resolution will produce sharper images. The pixel pitch should be as small as possible.

LEDs per Pixel refers to the location and the number of blue, red, and green LEDs in each pixel.

The LED screen module is based on pixels being arranged in a specific structure with standard sizes. Different manufacturers produce modules of different sizes.

The module consists of several pixels, and the number of pixels is determined by their diameter. Generally, in the case of an LED failure, the modules have to be replaced. There are a certain number of modules as a part of the ZIP.

LED Screen Cabinet refers to large prefabricated elements called panels that include a certain number of modules. The module parameters are multiples of cabinet parameters.

The cabinets are usually 0.5 m to 2 m in length and 175 mm in thickness. The front and rear view of the cabinet is shown in the photo. The panels are connected to each other without gaps to form a solid screen canvas.

When choosing an LED screen, you should check the screen’s actual resolution — the physical distance in millimeters between two adjacent LED pixels — by consulting the manufacturer or supplier. Some "pseudo-producers" and unscrupulous vendors sell video screens with a lower resolution at almost the same price as screens with a normal physical resolution, and they explain the cost by stating that they are using "virtual pixel" technology.

Generally speaking, for an LED screen with a given resolution and some specific pixel geometry, an algorithm is presented that allows, in some cases, to improve the detail of individual image fragments. The implementation of such an algorithm can be carried out in real time or previously by processing the image in some modified form.

The level of improvement of the image depends on the geometry of the pixels and the actual algorithm. This approach is perfectly valid and legitimate. However, it is necessary to weigh the pros and cons of this method.

What’s the Resultant Quality of the Picture?

Manufacturers who give examples of their implementation of the virtual pixel method illustrate their point by smoothing the edges on a black and white image of letters or numbers. If you just change the color of the displayed letters, the example crumbles.

Unfortunately, we don’t have any specific and objective information about the applied image processing methods. No one has yet presented the example of two monochromes (blue, for example) parallel lines that can be visually approximated using virtual pixel technology. This would indicate a real breakthrough in image processing.

Nowhere is the question asked: Do pixel “virtualization” algorithms lead to a deterioration in picture quality? Is the proposed algorithm capable of assessing how much the quality of a given picture can improve (thereby negating the need for any modification if improvement cannot be achieved)?

The Price of "Virtualization"

Despite the fact that the pixel is virtual, its implementation requires very real (and expensive) LEDs. The aforementioned methods are based on such a redundancy of the pixel elements. Higher redundancy leads to better smoothing of the edges of the image. However, for some reason, no one ever poses a question regarding the number of LEDs on the video screen.

Now let’s reduce the pixel pitch to 16 mm. At the same aforementioned physical dimensions, we can accommodate 400 x 300 pixels. If we use three LEDs per pixel, the number of required LEDs will be 360,000. That is approximately the same as for a screen with virtualization and five LEDs per pixel.

Does this technology have “virtual pixel” advantages? Yes, it does. It allows, in some cases, to sharpen the details of the image on the video screen, while simultaneously also introducing color distortions into the image. This method is useful for images with smooth transitions but it is not suitable for images with clear borders, in which case distortions will appear on the image. Consequently, that will necessitate that you specifically prepare videos suited for such a display. Not to mention the toll it will take on live video on such a screen.

In any case, a video screen with a real resolution equal to a “virtual resolution” will always have better clarity and images. Furthermore, as a result of the “virtual pixel” technology, it is futile to even discuss doubling the screen resolution.

Basically, you should be wary of manufacturers who appear overeager to convince you of the benefits of a wonderful new technology with an “exclusive software based on a mathematical approach.”

When you spend $500+
(Continental United States only)